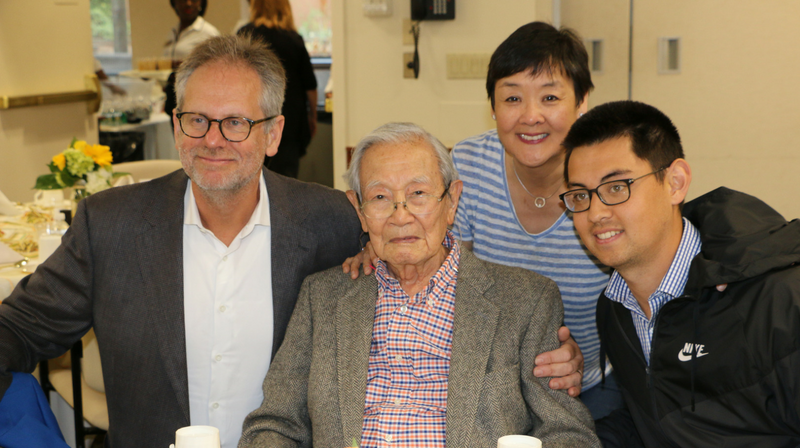 102 years of Laughter, Lessons and a Little Bit of Sleep

From his early years as a boy living on John Steinbeck’s farm to gracing the silver screen alongside the likes of Michael Douglas and Harrison Ford, Eddie Ikeda’s life has been nothing short of amazing. Now a resident at Willow Towers Assisted Living, Eddie recently celebrated his 102nd birthday with his family at our “Centenarian Luncheon,” where we honored 11 centenarians living here and across United Hebrew of New Rochelle’s campus. We had the chance to ask Eddie to share his story and reflect on his long and happy life.

Eddie was born in San Francisco, CA, but grew up in Salinas on a farm owned by writer John Steinbeck (who later wrote about migrant farms in Of Mice and Men). Somewhat precocious, Eddie learned how to drive a tractor on Steinbeck’s farm at the tender young age of 11. He was the oldest of six; Eddie had four younger brothers and one younger sister. He went on to attend Stanford University, and moved to Shanghai to begin his career.

He was working in Shanghai when he heard a lovely singer on the radio. A mutual friend arranged for him to meet the singer, who eventually became his wife. After the end of WWII, the couple moved to the Upper West Side of New York City, then settled in Queens to raise their growing family. They had two sons and a daughter. For most of his career, Eddie sold imported housewares for Styson, Inc. Eddie was an avid stock market investor and belonged to an investors club, enjoyed golf and tennis, playing card games, and watching sports. Eddie and his wife enjoyed traveling throughout Europe and Asia.

A Star is Born

At age 65, Eddie was in the audience of the David Letterman Show, which was filmed in New York City but purported to be on location in Tokyo. Show runners had recruited Japanese Americans to sit in the audience, and Eddie, being one of a few audience members who could actually speak Japanese, was assigned to ask a question in Japanese (while pretending he couldn’t speak English). When the translator fumbled his question, Eddie translated it perfectly for Letterman, who howled with laughter. A star was born! “Discovered” that night by a talent agent, Eddie went on to have a 25-year acting career, appearing in small parts alongside well-known actors including Michael Douglas, Harrison Ford, and Andy Garcia, in such films as “The Last Airbender,” “Sabrina,” and “Black Rain,” to name a few.

Eddie is most proud of his seven grandchildren and four great-grandchildren. As for how he has lived happily to age 102 and beyond, not being afraid to try new things (like acting) helped keep him sharp. He also says he worked hard at everything in his life, and got a lot of sleep along the way. “Study hard. Learn a lot. And sleep! Sleep is the most important thing,” he says. “Get lots of it!”