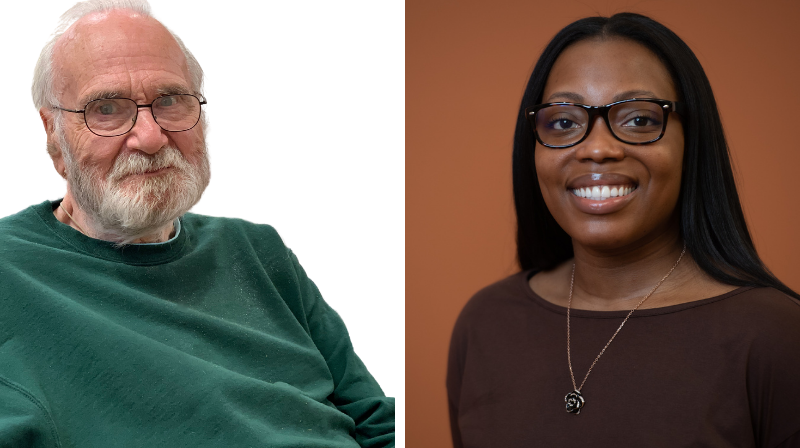 One of the benefits of living in a senior care community is having the chance to socialize, develop new relationships, and make meaningful personal connections with others. So, when Eugene Babitchev, a resident of our Willow Towers Assisted Living community, found out that Theasha “Tye” Gibbs was a fellow veteran of the U.S. Air Force, he welcomed the chance to swap stories. For Theasha, getting to know the residents is “one of the best parts” about her position as director of resident care services at Willow Towers. She recently interviewed Eugene about his experiences in the Air Force. Below are highlights of their conversation.

Theasha Gibbs: Great to see you, Eugene! I’m so glad we’re getting to talk about our mutual Air Force connection. I remember wanting to join the military from a young age. How about you, how did you get started?

Eugene Babitchev: It was 1951 and I was 19 years old. Several of my friends served in the Korean war and some were wounded or killed. There was a draft for the Korean War and I was scared. But you had a choice: get drafted for two years, or if you met qualification standards, enlist in the service of your choice for four years and try for preferred duty assignments. So I registered with the Air Force.

TG:  My experience was obviously very different in 2014, when there was no draft. Though I wanted to go after high school, my mother made me wait until after I graduated from college. So I was 21 when I volunteered. How about basic training – where were you for boot camp?

EB:  I was in upstate New York, in Geneva, a small town near the Finger Lakes. It was so cold, a cold like I had never experience before! I remember standing watch outside and just shivering. That was one of the biggest challenges.

TB: I had the opposite experience! I did my basic training at the Lackland AF base in San Antonio, Texas. When there was a heat wave, the base raised black flags as a signal to Air Force personnel that there was a heat warning. Those flags were raised every day! Do you remember taking the aptitude tests? What did you end up doing after basic training?

EB: Oh yes. There were a lot of tests! I remember getting a 100 on the math test, and being told I was suited for a job in electronics. I also took a photography exam and did well. I was sent to an Air Force base in Texas, not far from Lackland, and stayed for a year taking photos, documenting activities, performing public relations for the base. Then I was assigned to a reconnaissance outfit in Frankfort, Germany. I was fluent in Russian, German and Slavic languages. So my time was spent taking photos and doing translation work. Once, I was sent to the U.S. Embassy in Finland for a meeting and received a letter of appreciation from the Ambassador. So, my language skills came in handy! I traveled around Europe. Eventually, I was promoted to Staff Sergeant. I had an incredible life there.

TG: I can relate. My experiences were also incredible. I’ve always been really active and loved the structure of military life. My college degree was in criminal justice, so I was able to choose a position in military police. I ended up with the National Guard in Newburgh, New York. Someone overheard me singing and liked what they heard, so that launched a second role for me as a military entertainer! I sang at celebrations, memorials, and other commemorative services almost every day. I deployed to the Middle East as a military police officer and continued performing overseas. I volunteered to help locals learn to read. My superiors noticed, and I was asked to become a chaplain’s assistant. Those experiences really shaped me. After my military service I used my G.I. Bill education funds to pursue a graduate degree in social work. And that led me to my position here at Willow Towers.

EB: I learned a lot from my military service. It taught me discipline. I used my G.I. Bill to attend Columbia University, which led to my first job in banking. I retired after a long career at the Federal Reserve.

TG: I also gained a huge sense of discipline from my time in the service. What other ways to you think it impacted your life?

EB: I was born in Yugoslavia and lived in Russia until I was 17. People were suffering under Joseph Stalin. My parents moved our family here to escape his regime. I was grateful to this country for giving me refuge and a place to live, so my service made me feel highly patriotic. It still does now, at age 90.

TG: For me, too. I feel really fortunate to have landed at Willow Towers, and to work in a place that gives back and really celebrates its veteran community. I’ve really enjoyed getting to know you, Eugene!