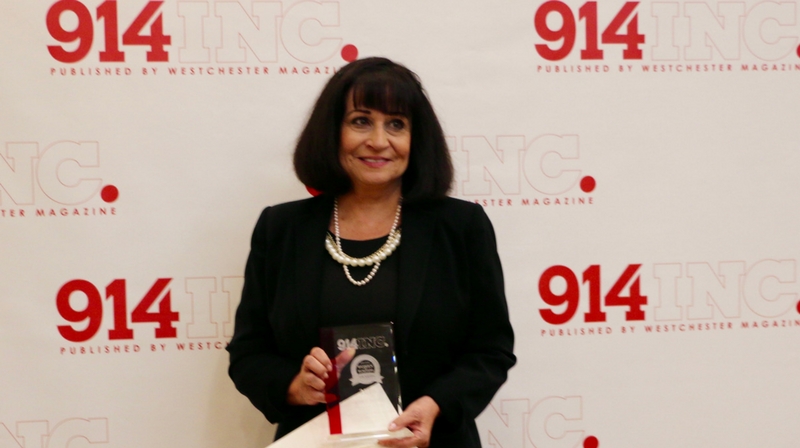 United Hebrew President & CEO, Rita Mabli, was recognized as one of Westchester County’s most successful businesswomen by 914Inc. Magazine. Rita received the magazine’s ‘2016 Women in Business’ award, which honors powerful business, government, nonprofit, and entrepreneurial women leaders who have demonstrated a consistent level of success in their respective fields and made a lasting impact on their communities and the Westchester County economy. Selected from a competitive pool of over 200 nominees, she and 17 other women leaders were honored at the magazine’s annual awards luncheon and are featured on the pages of its current issue.

“It’s a thrill to be included in this group of talented and passionate women who are making powerful contributions,” she said. “I’m humbled by the recognition. Of course. I also share the honor with my colleagues at United Hebrew, with whom it is my privilege to work on providing expert and compassionate care to Westchester’s seniors.”

The first woman ever named to an executive position at United Hebrew, Rita recognized early on that when it comes to healthcare, a one-size approach does not fit all. She led the transformation of United Hebrew from its modest beginnings to a full campus of comprehensive care offering a broad array supportive care services for seniors. United Hebrew of New Rochelle today is an innovative, state of the art healthcare organization where 800 staff members serve 1,000 residents and clients daily. It fills a critical regional need for quality eldercare services, which is increasing as Westchester’s general population continues to age.

Under her leadership, United Hebrew has been recognized for superior standards of care: United Hebrew is consistently named among the “Best Nursing Homes” by U.S. News and World Report, has earned the five-star rating by the Centers for Medicare and Medicaid Services for five consecutive years, and placed in the top tier of New York State’s nursing home rankings. The American College of Healthcare Administrators selected United Hebrew for its Eli Pick Leadership Award, earned by fewer than 9 percent of facilities nationwide. In addition, United Hebrew’s home health care division received 4.5 stars out of five from the Centers for Medicare & Medicaid, a rating far superior to many similar organizations in Westchester, New York State, and the nation.

Not content to rest on her laurels, Rita continues to innovate. Facing a growing tidal wave of people being diagnosed with Alzheimer’s disease and memory disorders, and recognizing that few specialized facilities devoted to their care existed in the region, she spearheaded the development and opening of Willow Gardens Memory Care, Westchester’s first nonprofit assisted living residence dedicated exclusively to dementia care. Offering memory-impaired seniors an opportunity to live on their own, with dignity and in a community, the facility features specially trained staff offering the latest enriching therapies and treatments, including music and art therapies tailored to meet residents’ needs. Willow Gardens is certain to be a leader in the treatment of Alzheimer’s, which affects 40,000 people in the Hudson Valley, and is expected to rapidly become more prevalent as Baby Boomers enter their senior years.

Rita credits her outstanding staff for helping United Hebrew’s to achieve its leadership position in the industry. “We’ve cultivated an environment of collaboration, kindness, compassion, and respect,” she says. “We treat each other, and our residents, like family.”

As a result, United Hebrew has one of the lowest staff turnover rates in New York State, with many employees choosing to stay on for decades, which provide a consistency of care to its residents that is unparalleled.

The 914Inc. honor is the latest in a long list of recognitions, awards, and leadership invitations Rita has received. She currently co-chairs the Westchester County Association’s Healthcare Consortium, a prestigious collaborative including executives of over 50 executives in healthcare, the county’s biggest economic engine. She was named a Woman of Excellence, and the Corporate Professional of the Year by the New Rochelle Chamber of Commerce, an organization for which she served as its first woman president. She also received the Distinguished Leadership Award from the American College of Healthcare Administrators, a Leadership Award from the American Jewish Congress, the Westchester County Golden Harvest Jim Curran Leadership Award, and Iona College’s Brother Arthur A. Loftus Award for Outstanding Achievement, given to alumni who have excelled in their fields.