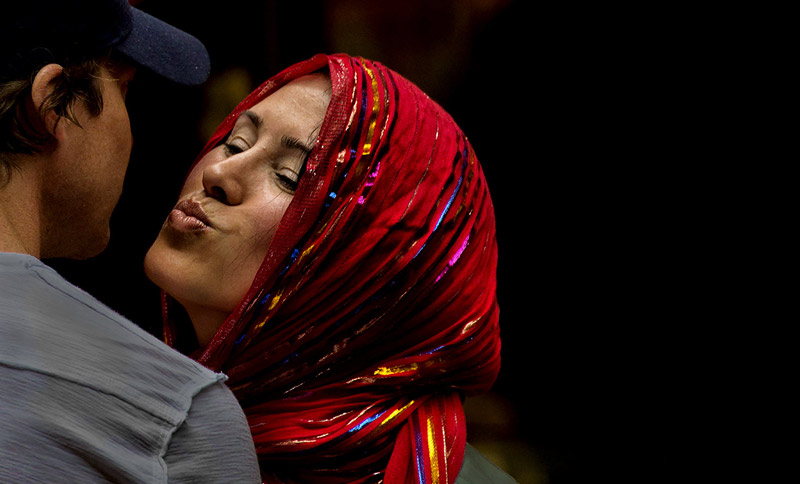 You can take a journey to sites near and far—see lions, flamingoes and look at Coney Island’s boardwalk in a new way—without ever leaving New Rochelle by touring our juried exhibition, “A Photographic Journey From Here and Beyond.” The 37 photographs in the show are on display at Lazarus Gallery at 391 Pelham Road through September 9, 2016.

Taken by 17 members of the Color Camera Club of Westchester, the images show a wide variety of scenes – everything from a koala bear in Australia to Coney Island’s iconic boardwalk is shown with an unusual bend. Lions gaze out unflappably at the viewer in one. Another shows flocks of flamingoes and yet another captures the fleeting intimacy of an air kiss.

“When you see these images, they can’t help but spark your imagination and your memories,” says Rita Mabli, United Hebrew President and CEO. Photography, she explains, is a great medium for engaging the residents and their families, which is the very purpose of the gallery since it was created in 2009. “Whether they show far off lands or a new way of looking at sights we’ve all seen, they amount to a celebration of life. And that fits perfectly with our philosophy of care at United Hebrew,” she says.

The exhibition was organized by Robin Zane, Curator and Jodi Moise, Gallery Advisor for United Hebrew. The gallery mounts several exhibitions annually aimed at helping inspire residents and other visitors to make connections between the art and their lives.

“We look for connection in every exhibition we curate for the Lazarus Gallery,” says Ms. Zane. “For this particular show, we emphasized the theme of a personal journey and chose photographs that would resonate with the residents, care takers and the community.”

“A Photographic Journey” is one of the many exhibitions on which the Lazarus Gallery has worked with an outside group, Ms. Zane said. For the Camera Club, which is made up of professional and amateur photographers, taking part in a juried show was a new experience, says Karen Ann Sullivan, co-president of the club and the chair of its exhibitions. The 37 photos to be featured were chosen from approximately 100 submissions, she said. “We provided a wide variety of photographs,” said Ms. Sullivan. “They included images of iconic places – local and abroad – shots of nature, which many people relate to, and images of animals and people.”

Ms. Zane said the photos selected provoke thought by showing viewers something striking, and something familiar taken from a new angle. The image of the lions – snapped by Sullivan in Tanzania – “makes you want to ask the photographer how she had three lions stay still and pose quietly,” Ms. Zane said. A distant shot of hundreds of flamingos, taken by Jennifer Dooley, compels viewers to move in for a closer look in order to understand what they are seeing, she said. The shot of Coney Island by Dennis Thornton shows a pronounced curve in the boardwalk, offering “a very creative interpretation of an iconic sight,” she said.

The exhibition is free and open to the public daily, 9 a.m. – 5 p.m. at United Hebrew’s Lazarus Gallery. A portion of the sale of artwork will support the many programs and services of United Hebrew. For more information contact Linda Forman, Senior Advisor to the President, United Hebrew, 914.632.2804 x1224 or lforman@uhgc.org.