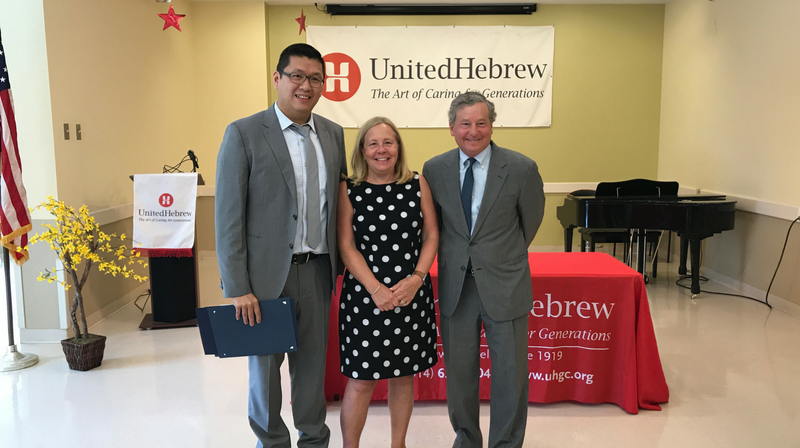 Kelvin Hui, director of information technology at United Hebrew, was recognized as an “Employee of Distinction” by Leading Age New York, which represents over 600 senior care facilities across the state. The award recognizes the extraordinary dedication of individual staff members who have positively affected their respective organizations. Only 16 individuals in New York State, and just two in the Hudson Valley received this award.

Kristen Myers, Vice President of Member Services and Marketing at LeadingAge, presented Kelvin with his award at a September 20 ceremony held at United Hebrew, attended by friends, family, staff, and board members Malcolm Lazarus,Rosemary McLaughlin, Pearl Quarles, and Michael Rozen. In addition, State Assemblyman Steve Otis attended and presented Hui with a certificate.

Hui’s leadership and expertise has, simply put, helped United Hebrew modernize its information technology infrastructure, according to Rita Mabli, president & CEO. “His efforts have resulted in operational efficiencies, improved productivity among our staff, increased communications capabilities, and perhaps most important, greater care coordination for our residents,” she says.

Hui also co-led United Hebrew’s transition to an Electronic Health Record system, a project that was estimated to take six months or more. Because of Hui’s attention to detail and work flow planning, it was finished in three months, says Jerome Bagaporo, chief nursing officer, who worked closely with him on the new system.

“Kelvin ensures that we deliver quality of care by maintaining and continually improving and updating our systems,” says Bagaporo. “He genuinely cares for the safety of our patients, and often visits residents’ rooms to help with individual tech needs. He also worked with me to create a system for our interdisciplinary care team, and it’s become an essential tool for quality assurance monitoring. Kelvin is a concrete example of service with a smile.”

Many of the initiatives Kelvin has overseen go above and beyond what is required. “Kelvin takes every opportunity to bring new ideas to the table, some of which we had never considered,” notes Mabli. “His approach is not to simply think about our needs today, but to consider our future needs, and how we can maintain and improve our information technology infrastructure to continually improve our residents’ satisfaction, medical care, independence, and safety.”

There’s something else that Hui brings to his position that can’t be measured, adds Mabli—a strong sense of family, which carries over into his work. One can often find him giving residents’ “lessons” on their smart phones: how to navigate the App Store, view and share photos, and download music.

“He treats our residents as if they were family,” says Mabli. “He volunteers his personal time after hours repairing residents’ personal technology devices, and he often stays late to help our residents them use them. Kelvin selflessly invests a great deal of time in his community, enriching lives on a daily basis. We’re so lucky to have him.”